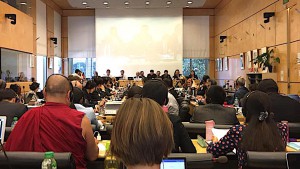 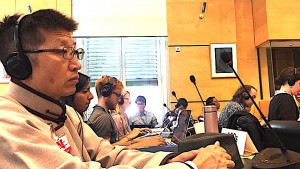 Thank you for this opportunity to speak on behalf of South Mongolian citizens.

Today I’d like to take this opportunity to speak about the ongoing systematic discrimination, torture, forced disappearance and killings toward Mongolian people by the People’s Republic of China’s Communist regime.

We Mongolians were forbidden to practice Buddhism, which is our traditional faith.

It is open violation of the Universal Declaration of Human Rights Article 18 which clearly says “Everyone has the right to freedom of thought, conscience and religion.”

Many Buddhist monks were suppressed and their temples have been destroyed by fires.

Historically we, Mongolians have been nomads for thousands of years.

However, China’s Communist regime prohibits us to move around and forced to stay at a place to work for the agriculture industry. But Mongolian grassland gets little rain and it’s not suitable for farming. As a result, crops did not grow and a lot of people died of starvation.

The Chinese government admitted 346,000 arrests, 27,900 executions out of 1.5 million populations. About 120,000 were crippled during the Cultural Revolution.

These numbers are officially announced by the Chinese government but it is far from the truth.

Some Mongolian scholars have estimated that hundreds of thousands were sacrificed. Clearly, the Mongolian grasslands were the site of ethnic genocide.

Despite Chinese reforms and greater transparency, the policy of racial discrimination against Mongolians has not changed. As a result of it, 60 percent of our grasslands have been desertified.

Chinese build factories spread pollution and are destroying the environment.

The Mongolian economy is totally in the hands of Han-Chinese, and Mongolian own resources are under their destructive development and no benefits are provided to the Mongolian people.

In the 21 Century, this fundamental human rights violation should not be ignored which this Committee needs to pay more attention.

Ironically China is a member of the Human Rights Council of the United Nations which is nothing but cover up of their sins. Self-determination and racial equality have to be guaranteed by the state.

2. Respect the Mongolian society and their lifestyle.

5. Stop destroying the environment of the region.

6. Respect and follow the Universal Declaration of Human Rights.

This is not happening only in South Mongolia but in Tibet and East Turkistan as well.

Thank you for your attention.

Statement of “May 11 World Day to Support of South Mongolia”         The Chinese government is urged to stop its genocidal atrocities against South Mongolia!

May 11th Statement —World Day in Support of South Mongolia

Open letter to the U.S. Congress